Great Day Moving is proud to be an annual sponsor and contributor to the Patriots’ Run held every year in Olathe, Kansas to “Thank and Honor Those Who Serve Our Country.” Since 2009, the franchisors, Roger and Dana Ward, have been able to contribute in some way as a volunteer, organizer, or via resources and monetary donations. Both Roger and Dana are Army veterans and Roger served in 3 overseas deployments during his enlistment between 2002 and 2005.

The Patriots’ Run is an annual event held to commemorate the tragic events of September 11, 2001. The Patriots’ Run is much more than a running event. It is a chance for regular citizens, and those with a love of running, to honor the victims who were lost on that day as well as the soldiers, police, firefighters, and others who have served our country on that day and every day thereafter. Every year, a portion of all proceeds are donated to The Salvation Army in Olathe.

This year the Patriots’ Run will take place at the Great Mall of the Great Plains in Olathe, Kansas. Following the tradition, it is a 9 hour and 11 minute run starting at noon on Tuesday, September 11, 2012. The events leading up to the run begin at 10:30am.

Some people mistakenly think that they cannot participate unless they are a marathon or ultra-marathon runner; however that is not the case. There are 7 divisions or categories for those wanting to participate: ultra-marathon, marathon, 5k (which begins this year at 6:30pm),

casual walk/run, wheelchair, race walk, and even relay teams of up to 10 members. You can register online HERE until registration closes at midnight on September 9, 2012.

This year, there are also 2 bases in Afghanistan where soldiers are participating in their own Patriots’ Run complete with shirts and medals provided by sponsors here in the US.

The Patriots’ Run logo design is significant to the overall theme. The two blue bars symbolize the victims of the Twin Towers, Pentagon, and Flight 93, and the survivors. The five red bars are for the men and women who serve our country and communities – Armed Services, Police, Firefighters, Emergency Personnel, and the families of those who serve.

Here are just a few of the pictures taken at last year’s Patriots’ Run! 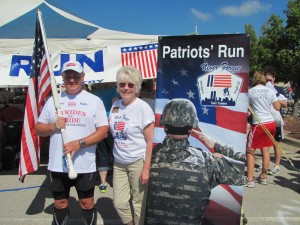 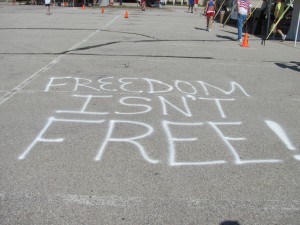 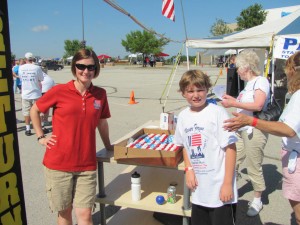 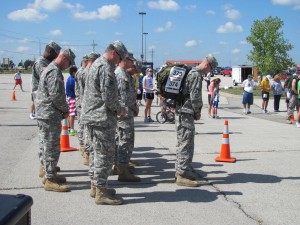 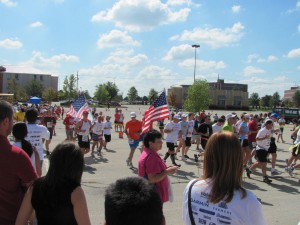